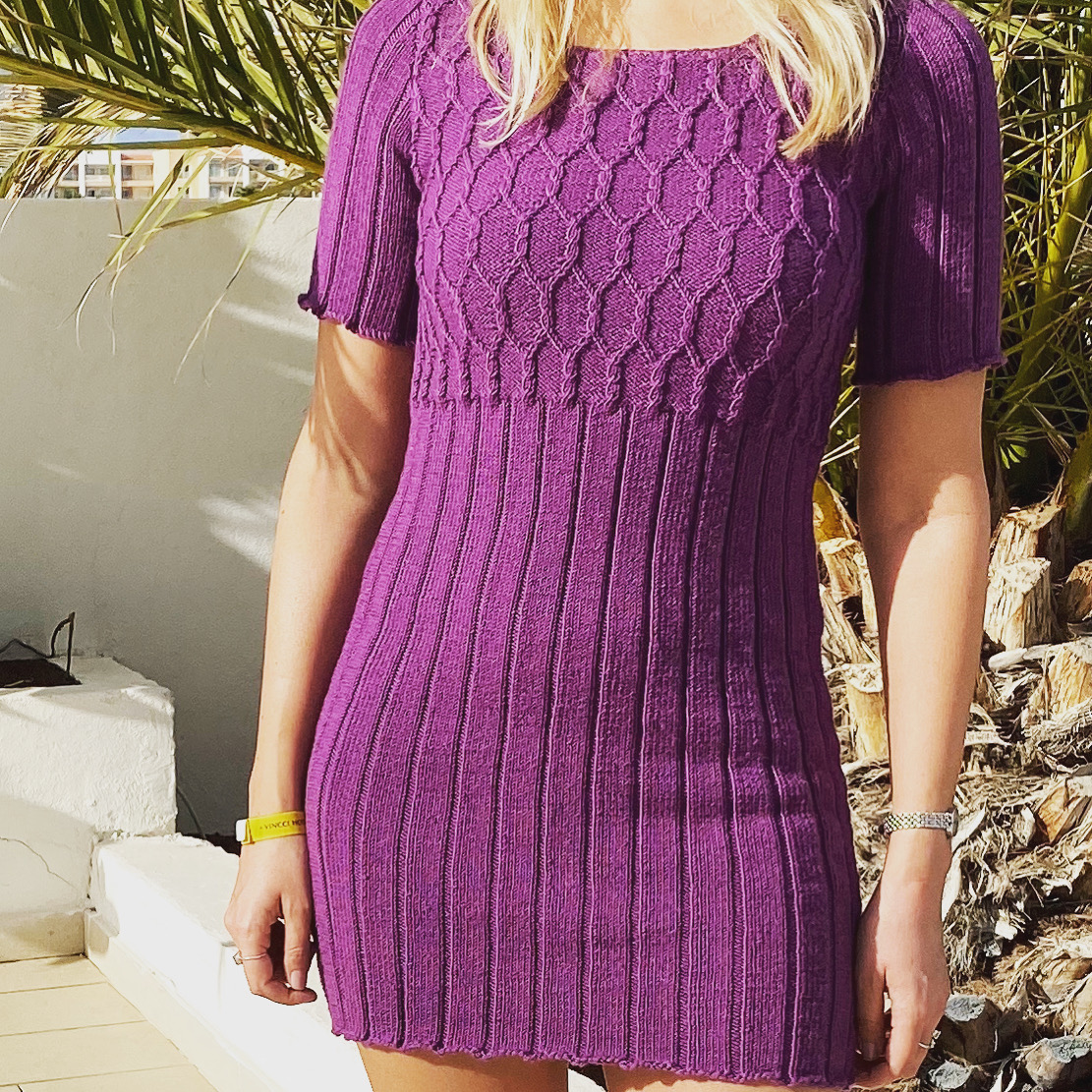 When you’re a knitwear designer, it’s really important to try and get good photos of the knitted sample that you’ve written a knitting pattern for.

After all the hard work that goes into designing and writing the pattern, it would be such a shame if the photos let the pattern down.

Since I’ve been designing for several years, I’ve been able to review my pattern photos and assess what I’ve liked/not liked about them and where I could improve.

I find this is an ongoing process, and I can still produce photos I’m not entirely happy with, but l always hope that I can learn how to improve on taking the photos in the future with practice.

For me, one of the key things to a successful knitting pattern photo is location.

There are also other things that need to be taken into account, such as finding the right model for the item (if a garment or knitwear accessory) and also weather conditions and lighting.

As much as I wouldn’t want to have the photos taken on a rainy day, I also learnt over the years that a bright sunny day isn’t always great either so it’s getting a balance to get the best possible photo you can.

I’ve always tended to model for the photos of my knitting patterns. This was mainly because the sample garment for the patterns are normally in my size, plus I save on the cost of hiring a model for the day so it just made sense for me to do it that way.

Whilst in an ideal world you could dream of having your perfect model, a picture perfect location and an amazing, top of the range digital camera with a professional photographer, the reality is that all of this would potentially cost a small fortune before you’ve even started listing the patterns for sale.

When you’re a small business, such as mine, you need to be realistic about costs of a photo shoot and ideally try and save money where you can, since you don’t know whether the pattern you’ve designed will be popular or not.

Over the years, I’ve experimented with trying different locations and once, I even hired a professional photographer, like on this particular photo shoot for my Stem Leaf Lacey Dress pattern:

Whilst I was impressed with the results of the photo shoot, I found that I didn’t sell anymore patterns than others where I hadn’t used a professional photographer.

This was an important lesson for me to learn where my business is right now. It isn’t necessarily important about the type of camera or photographer I need to use for the photo shoot.

I am quite fortunate to live near Brighton Beach, so I have a great location for taking a lot of my pattern photos. However, I do worry about my photos becoming boring if all of my photos were taken at this location (especially as the same model is normally used which is myself) and sometimes, the particular item I’ve designed doesn’t always suit the beach location.

I therefore have had to get creative over the years to find other locations to take photos of my knitwear.

For most photo shoots I tend to only need five things for the photos:

With regard to the camera, I did have a digital point and shoot camera, but in recent years, the camera phones have become so good, they tend to be all I need for my particular photos.

I normally get my husband to take the photos, using his latest iPhone camera.

Some good locations over the years that I’ve found for taking photos is when I’m abroad on holiday. A few years ago, I visited an Ice Hotel in North Sweden which provided an amazing back drop for taking photos of the sample garment for my Textured Yoke Top knitting pattern:

This photo was taken by my husband using the camera on his mobile phone.

In Autumn last year, I had re-knitted a sample garment for my Cable Dress knitting pattern since this is a pattern that has always proved quite popular. The yarn I originally designed it in was unfortunately discontinued. I had also loved the original sample garment so much that I wore it until it practically fell apart so wanted to knit another one to be able to wear. I therefore knew it would be a perfect time to re-knit and re-write the pattern with a current yarn that is still for sale.

Also, I was really keen on re-doing the photos since the original photos were taken a few years ago when I was new to knitwear designing and pretty clueless about how to take photos. I think what made the pattern really popular was that my husband had taken a photo of a close up of the cable pattern detail on the front chest area which was quite striking:

However, I didn’t feel the rest of the photos taken were particularly great like these ones, as we had just taken them against a white wall in my living room:

I knew for the updated pattern, that I wanted the photos to be taken outdoors on a fairly sunny day.

This brings me to the next important lesson I’ve learnt on taken pattern photos which is PATIENCE.

When I’ve knitted a sample garment, I’m always really excited by the finished product and am keen to get the photos taken and the pattern listed asap!

However, in the past when I’ve rushed this process, I’ve ended up with poor photos that I’ve either had to discard and retake them or had to accept them for what they are and edit them the best I can.

Once I had finished the Cable Dress sample garment in Autumn, I had to be ‘patient’ and carefully plan where I was going to have the photos taken for this truly amazing dress. I wanted to do it justice!

I knew in December, I would be flying somewhere warm for some winter sun just before Christmas so decided this may be the perfect opportunity to take photos of the dress.

I also think it’s better for my husband (who takes the majority of the photos) as he is more relaxed on holiday and not frantically rushing around his really busy job to take time out to take photos for me.

We went away to Tenerife for a week and it was a really nice temperature at that time of year for wearing a knitted dress as it wasn’t too hot.

Here are some of the photos taken in Tenerife:

I was really happy with these photos and was thankful that I had waited for the right location rather than just rush about taking the photos anywhere since I don’t think they would have turned out as nice.

I liked the rockery area in Tenerife where we took a majority of the photos. There was some cloud in the sky so the photos weren’t too bright. This means I got the knitted detail I wanted to show in the dress.

Recently, I decided to take some photos myself of a free knitting pattern I listed called the Ribbed Scarf.

Since it was a knitted accessory, this was an easier photo to take by myself rather than a garment I would have had to model.

I initially took a photo of the scarf which I laid out nicely on the beach where I live:

I don’t normally do ‘selfies’ but I decided to do one for this scarf pattern:

I thought these photos were good enough for the pattern so used them.

I’m currently working on some new designs that I’ll be releasing this year which is very exciting!